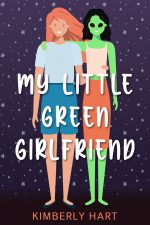 When Marsha’s broken teleporter sends her to Earth, her only priority is to get back to civilization. Unfortunately, she has no way to get off this primitive planet or even contact home. Since she’s stuck here indefinitely, she’ll have to make the best of it.

Sophie is surprisingly calm when the beautiful woman wandering the streets says she’s from outer space. Having often felt like an alien herself, she’s determined to help Marsha however possible – even if that means letting the complete stranger move in with her.

As Marsha tries to settle in on Earth, Sophie realizes she’s unique in the universe. It’s not just Marsha’s unearthly good looks; Sophie is drawn to her kind and curious nature. Meanwhile, Marsha realizes that even a backwards planet can be home to intelligent life – and that the life form called Sophie is also downright sexy.

Will Marsha find her way home? Or will her heart convince her to change her plans?

Nat Butler is a rock goddess.

A goddess with a penthouse apartment, a long-running career, fans across the globe… and nothing real to hold onto.

Her recording contract is up, and when an ugly breakup drags Nat into the tabloids, she decides the universe is telling her to take a break from LA. She’s ready to build something of her own – something real – so she heads back to her Ohio hometown to scout a local band in the hopes of starting a production company.

Instead of an answer to her problems, Nat finds Christy there – a former lover Nat left behind when she got her big break.

Once a passionate athlete and a shy but vibrant girl, Christy is a shadow of her former self after a painful divorce ruined the plans she’d made for her life, took away her dream home and turned her world upside down.

And despite Nat’s enthusiasm, she’s not too happy to see the woman who broke her heart fifteen years ago.

Things in Ohio aren’t looking much better than LA, but Nat knows that the universe brought her back into Christy’s world for a reason and she’s determined to make amends while she chases her own dreams.